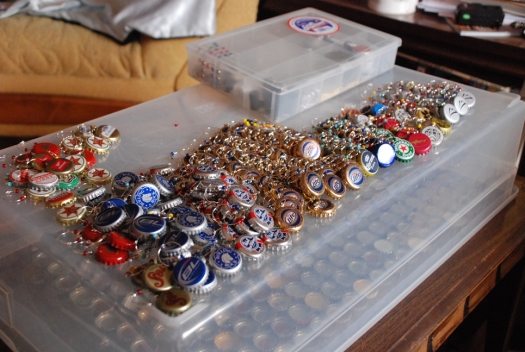 Ahhh, nepotism.  I’ve taken a cue from our daring-do governor and hired ‘one of my own’ at a very lucrative per-piece rate where he can work from the comfort of his own home.  No, it may not be a public office and no, I’m not paying him over $40,000 for a previously-fictional entry level position – but the motivation is the same.  If I can save myself an hour of work and dole out some cash to Jason so he can go buy me flowers then I am all. for. it.  Without further ado!:

The month of July has basically been a series of bottle-cap fueled weeks trying desperately to keep up with orders that my client is getting.  Wahoo!  Thus, the need to hire our some labor and get a little R&R myself – what with me somewhat ridiculously holding down a ‘9 to 5’er, coming home after 8 hours of work, messing around with recyclables for four hours, it’s actually getting to be like working two job with no weekends.  So this is pretty freaking great with the added bonus that when I’M bottlecapping, HE’S bottlecapping, so we can have fun time together instead of me being hunched over Budweiser crowns in the corner while he frolicks through the fields and does whatever else I’m sure other, none-incredibly-busy people get to do with their evenings.

I’ve all but abandoned my Etsy shop, but I’ve managed to get my bottle cap hair clips in to the most adorable children’s boutique in South Portland, on Route 1.  It’s called Dahlia’s World, it’s across from Governor’s restaurant, and it’s AWESOME.  If you have wee ones or wee ones to buy things for or wee ones whose clothes are too small for them now this is basically the only stop you need to make.  Plus now they carry adorable hair clips – I’m about to go make a huge handful of strawberry ones for the little ladies – stay tuned!

My Employee, Jason (left), is pretty handsome. I plan on sexually harassing him at some point.

Moths are attracted to light.  So are photographers – so it stands to reason that sometimes I just feel more moth-y than other times.  When I left Shaw’s today (after a raucous bout of couponing) the sky was all heavy from a recent downpour, but the clouds were thin enough that you could see the sunset.  It was bright magenta and royal purple.  I could stand in light like that in a parking lot all day, if I could.  I think about other planets and suns and how different their light must be.  Maybe, to them, bright, high-noon sunlight is their ‘magic hour’ and they wish they could live on a planet like ours.

Two things:  I’ve been watching Carl Sagan’s “Cosmos” obsessively again.  I really like outer space.  Also, I just hung a show at India St.’s Coffee By Design today, I hope to take pictures soon, and put them up on this blog.  The show is called “Holiday” and it features photographs from Daytona Beach, Kennedy Space Center, and the 4th of July fireworks in Portland a couple weeks ago.  Don’t worry — they don’t ‘look like’ fireworks, although you’d have to be an idiot to not know they’re fire works.  The show was directly inspired by how in love with Carl Sagan I am.

Now on to more important, money-grubbing things.  I went to Shaw’s again tonight, on the last night of their weekly sale, to ‘get mine.’  I grew up in a Hannaford family, mind you, with a cumulative 17 years worked for the company among multiple family members, and I go to Hannaford for my regular shop.  I’m also newly in love with Trader Joe’s, mostly because they help me eat samosas.  Anyways — but SHAW’S seems to psychotically want to give people thing for free, or nearly free, on a weekly basis.  Every week they want me to get something new for free.  Here’s what I got this week:

Click on that picture to get the big version, …if you like looking at pictures of groceries, that is.  Otherwise, here’s the rundown:

Don’t cut (or buy) coupons for things you don’t normally love, or wouldn’t like to try.  Let’s start with the obvious:  the Polar seltzers.  I bought some $1 off/4 liters coupons from www.thecouponclippers.com for about 5 cents or something each.  What’s that you say?  PAY for coupons?  Silly!  Not actually silly considering this happened:  Shaw’s was offering “Buy One, Get One Free” on Polar Liters this week (they are f—ing nuts, what is this, Payless Shoes??) and I had the $1 off/4.  So if I BOGO’d twice (they cost $1.29 at Shaw’s) then I was at $2.60 (ish) for the 4 liters.  $1 off of that (with the coupon) and it was $1.60 for four liters.  And then I did that three times so now my fridge is full of refreshing things to take to the beach.

Couponing for sauces is always a good idea.  I love sauces.  Plus, they’re usually pretty cheap and if you can get ’em on sale then you’re looking at most likely free sauce.  Free Sauce!!  That Frank’s Red Hot was $2.49 with $.80 off on sale.  Plus I had a $.75 off/1 coupon for it (which Shaw’s doubles — they double anything under $1… again, crazy) so that was $1.50 so that big ol’ jar of fiery deliciousness was only $.19.  If they taught us stuff like this in math class in high school maybe I wouldn’t have failed miserably and ended up only taking art and English my senior year.

My bill would’ve been about $2 less had I not needed toilet paper and a box of pasta to get me through the weekend… (I’m low maintenance).  Then I got some salad dressing although that was kind of dumb, since people should just make their own salad dressing.  I normally do — but we’re out of olive oil.  Talk about treating the symptom and not the disease!

So, savings just over 44% on groceries that I’ll definitely use is not a bad thing.  Since I don’t qualify for EBT (stupid salary and health benefits!) but am still, somehow, a poor lady in her late 20s, this kind of thing makes me leave the grocery store with an ear to ear smile on my face.

…One day, I will talk more about art.  Sorry to bore you with my groceries stories tonight!