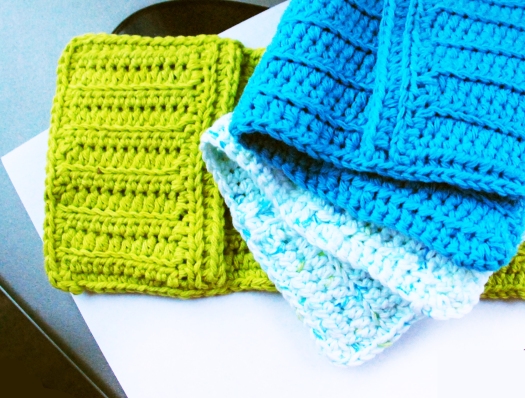 Set of 3 Swiffer Covers from Hand Knitted 4 You, $10 on Etsy. Click to view listing.

By far, my most active social group on the interwebs is no, not Facebook, no, not Cat Blog Lovers Anonymous, but our very own Etsy Maine Team.  It’s a collection of 600+ Maine artists, crafters and vintage sellers on Etsy.  P.S. if you wanna belong, go here to the forums and sign up!  Anyways, Rowena from handknitted4you has these great, 100% cotton reusable swiffer covers she crochets.  As soon as I saw them I wanted them!  They were a topic of discussion in the forums at one point because everyone wanted to purchase multiples (instead of just having one) so that you can have one on the swiffer, one in the laundry and a clean one waiting in the wings.  She started listing sets of 3 and as soon as I had enough money in my Paypal account they were mine!  I even put in a custom request for three specific covers, and the turnaround was less than two days on these hand-crocheted housewares.  Awesome.

I’m going to try to purchase something from Etsy at least once per month that isn’t a supply.  This is the January installment, and I couldn’t be happier.  They came today (after shipping on Monday!  Whoa that’s an advantage from ordering in-state!) and I can’t wait to clean my floors.  Wait, what?  I can’t wait to clean?  Better go check my temperature. 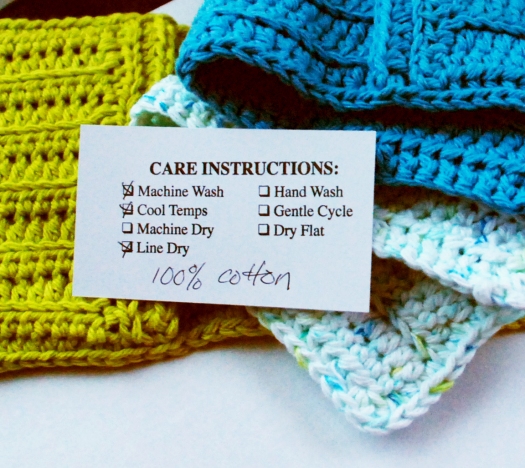 A cat-lover’s diary from 1988.  Totally messed up.  You will laugh (and maybe cry) forever. 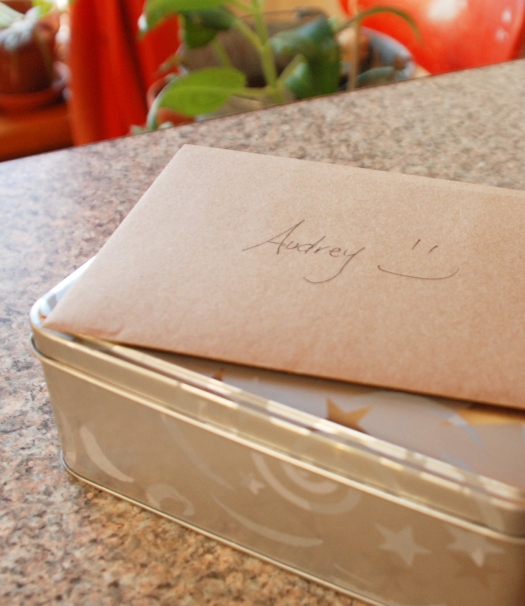 Secrets Inside Just for Me!

Last week I participated in the giveaway Chrissy-jo from Kindred Images and Creations held on her Facebook fan page.  And guess what?  I’m the winner!  Extra exciting because Chrissy-jo is a member of my favorite Etsy team, the Maine Team (obviously it’s the best). 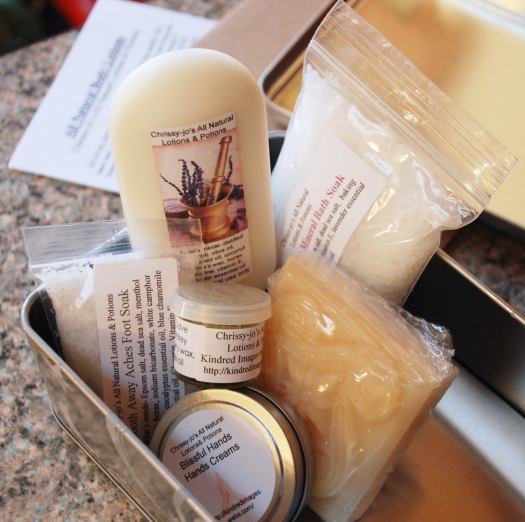 The intoxicatingly herb-y package arrived in the mail yesterday, and with some nice, wintry late-afternoon light I had a chance to photograph all the goodies.  I’ve already used the comfrey healing salve on my aching neck + head (swollen sinuses for both of us this weekend, makes for a headache-y house!) and can’t wait to use the bath goodies.  The salve was so soothing and not overpoweringly scented.  Love at first rub.

Head over and ‘like’ Kindred Images and Creations, or visit the Etsy shop here! 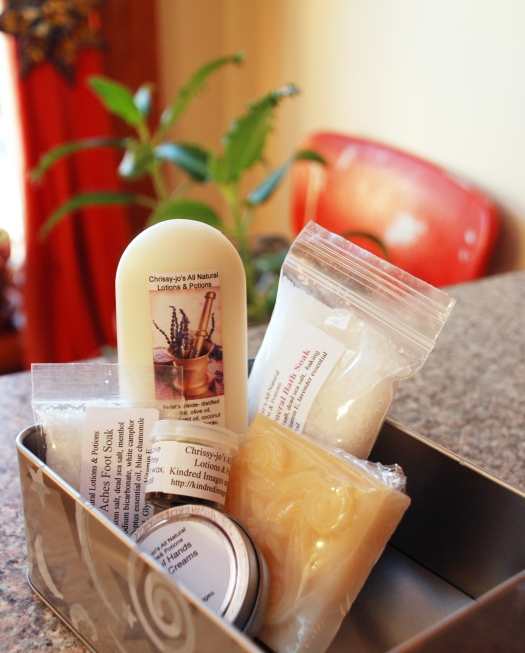 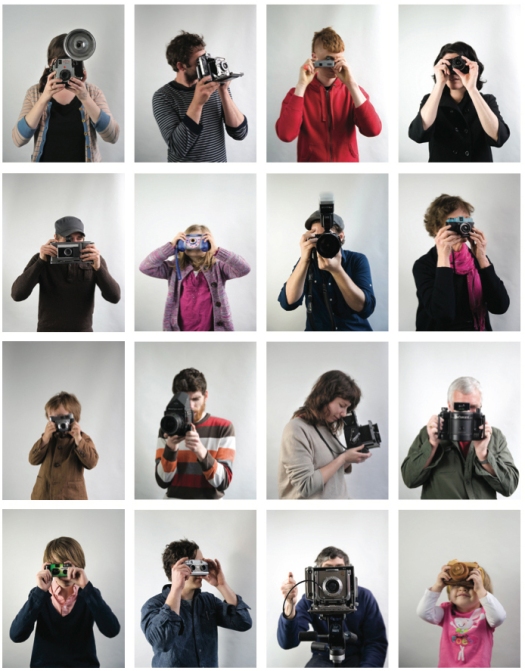 Ohh, hey!  I sat for the talented Natalie Conn a few months back and realized that my mug (or part of it) is on the Bakery Collective website.  Cool!  Me and my medium format, Mamiya C330 twin lens reflex are second row from the bottom, second column from the right.  Nevermind the drawbacks of having your picture taken from the side and when you’re looking down, this is an awesome collage!  Thanks, Natalie.  🙂 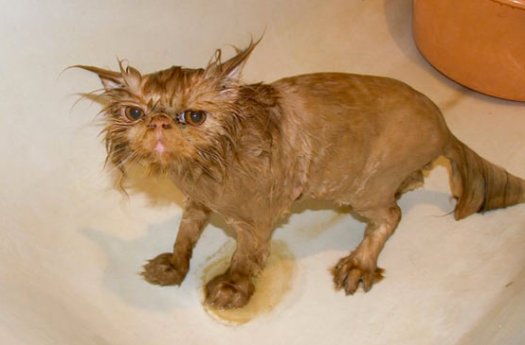 Not actually my cat, but pretty accurate

Apparently, while JR and I were at work today there was some kind of massive cat event that took place.  I can only work backward from the clues they left, but here is as much as I know:

-I had to give both of them a bath last night.

Giving cats a bath is simultaneously horrifying and hilarious.  They look ridiculous, but they are still really sharp at five or six major cat points.  Just five.  Hm.  I had to wash them because they’ve had a mild case of the fleas for the last couple of weeks, which subsided for awhile but they were still super itchy.  So I filled up the sink with lukewarm water and plunked cat #1 (Cash, the brown cat) in to the water.  She was shocked, but docile.  She is most hilarious when she’s wet because she’s such a tiny cat.

Yuna (the gray cat) was watching this from his food dish the entire time thinking “Ahh, yes, the brown cat is pretty dirty.  Good call.  I am sure I’ll be safe over here.  Meet me in the living room in ten for some good cuddling!”  But he was next.  And this was SCARY.  He’s HUGE and his claws are like razor-sharp velociraptor talons.  He’s basically a miniature lion, and about as dumb as an ox.  So he quickly forgets that the evil monster throwing him in a sink-full of warm water is actual his human-mommy, who loves him, and wouldn’t do it if it weren’t for a damn good reason.  The howling, screaming, wailing, thrashing, hissing, coughing that ensued was a bit much for all of us.  Eventually he was so stressed (even as I was trying to get a towel around him) that I just let him jet, soaking wet, through the apartment.  Hardwood floors be damned:  we had both had enough of each other.

I thought they forgot about it by this morning when they were happily munching on their breakfast, both of their coats fluffy and clean and free of itchies.  Until…

Exhibit A:  Huge pile of papers knocked on to the floor.  Various mail, folders and receipts.

Exhibit B:  Recipe folder and all recipes strewn around the floor.

Exhibit C:  Glass vase tipped over balancing precariously on the seat of a dining char.

Exhibit D:  Potting soil spread all over floor under table.

Exhibit E:  Pennies all over kitchen floor, all the way to the sink about five feet away.

Apparently while we were out the Cat-Olympics were held in the dining section of our kitchen.  I’m guessing some kind of relay race or death-defying cat chase was the main event. 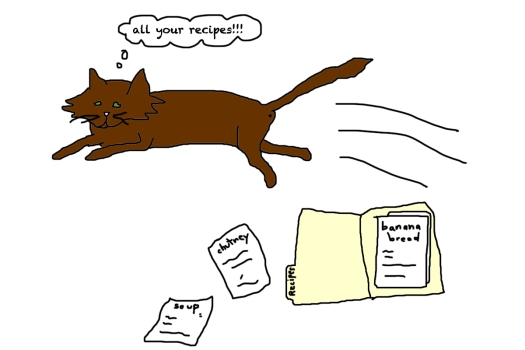 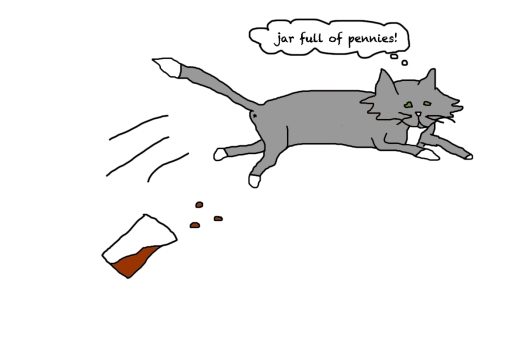 Or maybe they are saving up to buy some tootsie rolls at the corner store.

Hey, at least this isn’t as bad as the last Monday cat debacle… 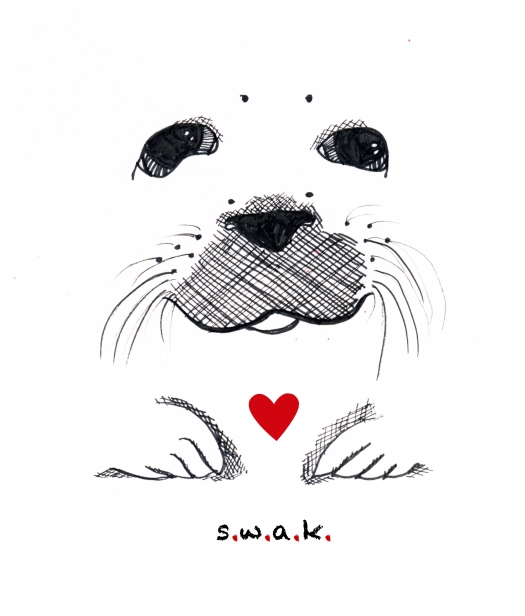 La-dee-da!  It’s not every Wednesday night you’re lounging around, looking for something to do and end up as productive as I have!  Little Eye has just opened her Cafe Press shop featuring, for now, just ONE lovely, Valentinesy designy.  The doodle is a little harbor seal pup I drew a few months back when I was making big plans for a screen printing machine J.R. and I had picked up at the craft store.  It’s still sitting in the same place in our art space, but I was desperate to see my drawings on some products.  Enter:  Cafe Press!

I added a heart and some text to the illustration et voilà, finis.  The illustration is also available without the heart and text so if you’d like me to add a product email me at littleeyedesigns at gmail. 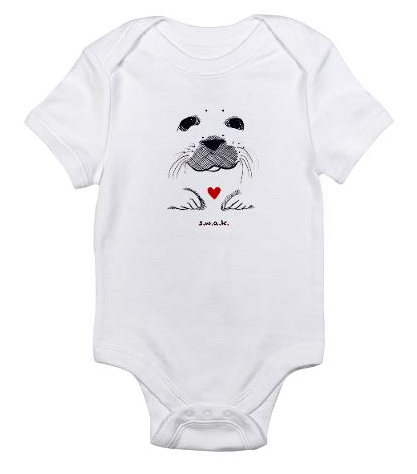 This is a relatively new venture for Little Eye so any feedback you have about the design, the product selection, pricing, or anything else you can think of is greatly appreciated. 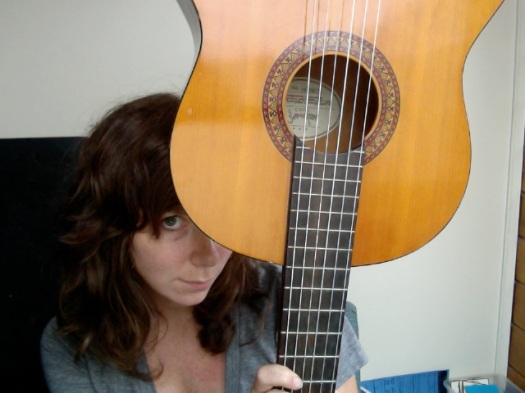 You don't actually get a guitar at karaoke. You get bright lights and a microphone. It's horrifying and awesome, just like a roller coaster!

…was so much fun tonight!

D.J. Ponyfarm (née Jonathan Charles Merrifield) puts on the most fun karaoke, complete with applause tracks and awesome song selections on Tuesday nights at Slainte on Preble St. in Portland (across from where the old Public Market used to be).

Kristina did “She Blinded Me With Science” and “The Tide is High” (totally rocked it) and we sang “Ticket to Ride” and “Turning Japanese” together and I did “Satisfaction” and “Got My Mind Set on You” (Harrison) and WOW it was fun!

I’m all jazzed up.  Time to mellow out with my annoying kitties and head to bed.  ‘Night, folks! 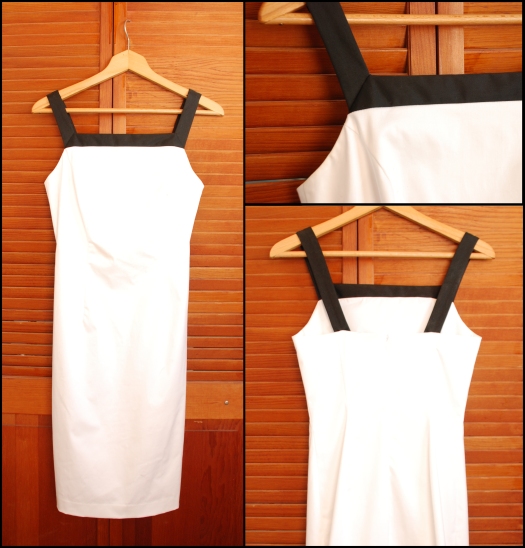 She comes first ’cause she’s my favorite.  The problem with clothing purchased for occasions is that they are often chosen a tier above one’s ‘regular style.’  Like, you’re not going to wear a wedding dress every day (but if you do, I think you’re awesome and I wanna know you).  Same here – for my HIGH SCHOOL graduation my Mom and I searched high and low for something that would be cool in the June heat, modest yet still young and ‘hip’ as the kids are calling it these days.  I wore this dress under my white graduation gown with strappy Etienne Aigner high heel sandals with little, white leather flower details.  Eventually the shoes gave in but I cut the flowers off and they are buried somewhere in my ‘stuff.’  I couldn’t bear to get rid of the dress, too.  But then one day, like a bolt of lightning, it hits you that you haven’t worn something in 10 years but you have, indeed, been moving it from apartment to apartment.  Time to let such a pretty thing grace some other woman’s body for a special occasion.  And repeat. 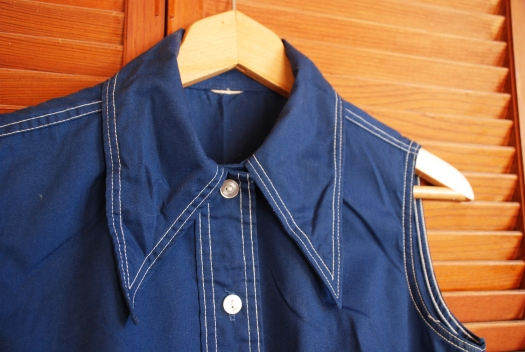 Click on the image for the Etsy listing and more pictures.  This was one of many thrifting finds where I didn’t totally have the time to try on the garment before I impulsively bought it.  “I’m sure it will work!” and it did, like once.  I wish I was a lady who felt comfortable in belts.  Is that weird?  I look good with a belt, it just feels weird.  In any case, this lady needs a belt and someone who has strong enough cheekbones to counteract that super duper long 70s collar.  Dyno-mite! 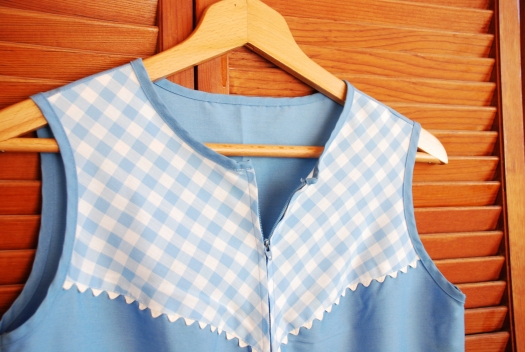 This weekend I started the project that I’d long been fantasizing about.  It’s not as glamorous as I thought, and I did manage to drop my camera and jam up the auto focus on my zoom lens (which is fine, I’ve been meaning to get a fixed lens for quite some time now!  Better picture quality.) but it’s nice to start cleaning out the closets.

Any time I see a really neat piece of clothing at a good price I always say to myself “Hey!  I could sell that if it doesn’t look good on me!”  80% of the time I get the damn thing home and realize it doesn’t fit, isn’t ‘me’ or really like it but then never manage to wear it. 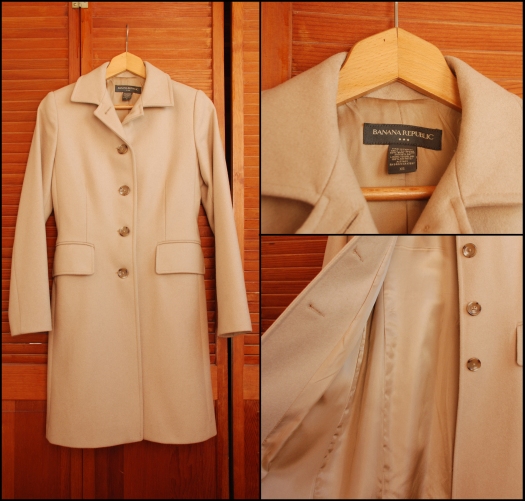 I’ll be posting my clothing listings, on Ebay and Etsy, over the next few days.  Hope you like! 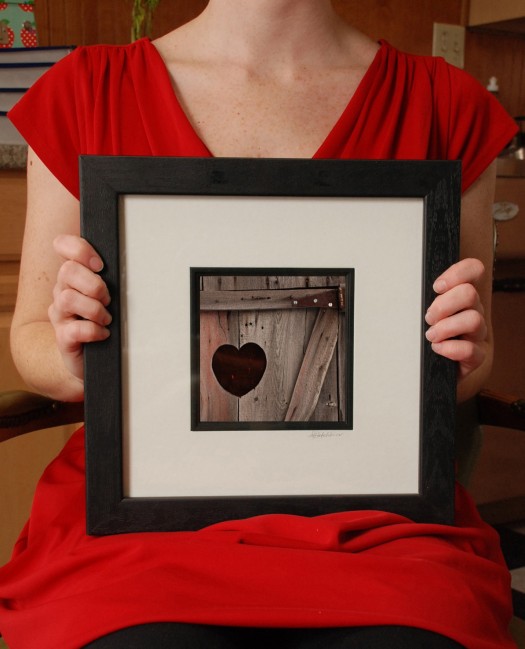 I think I posted this leading up to Valentine’s Day last year.  It’s one of my favorite pictures.  It’s an outhouse window (well, technically a tool shed now what with the advent of indoor plumbing) on my Grammie’s acres in Northern Vermont.  Available in my shop!