Alas, apartment-living.  You are the best when it comes to not mowing the lawn, replacing the water heater in an emergency, and requiring a down payment.  But you are the worst when it comes to gardening!  With little or no yard to speak of, and a hesitance to share my seedlings with grabby neighbors who might think our porch is their property, too – or worse, think it’s really fun to chuck terra cotta pots around at 2 a.m. on a Saturday night – I have to settle for a little kitchen garden until I get my own backyard.  That’ll be a victory garden, indeed. 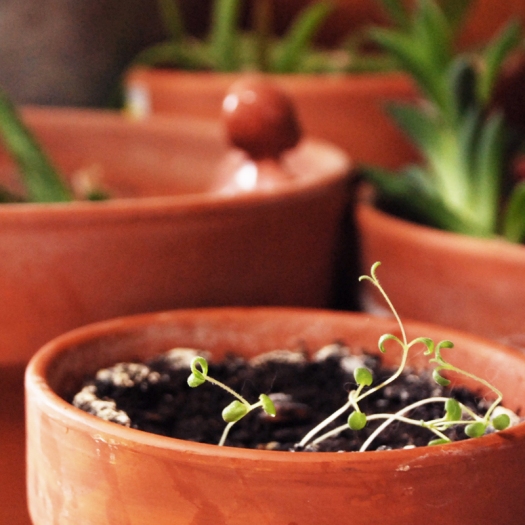 love grows where my rosemary goes

I started the rosemary and the oregano seeds at the end of January, and in full sunlight on the counter all day they’re doing famously.  I need to read up on how to care for these so that they bring the most productive herb-age to our dinner table.  I think the oregano will be easy, but rosemary seems like a testy bitch.  Already all the seedlings are just growing on one side of the pot and the soil is turning white.  Hrm. 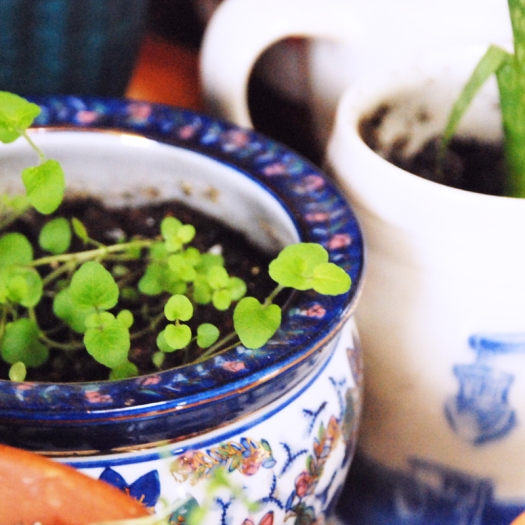 Here is the oregano.  It’s already plentiful and the leaves look like proper oregano leaves, just junior sized.  I hope I don’t have to replant it, just tear bits mercilessly from this little pot and it will grow back as tenaciously as it already has in the last two months.

welcome to the world, little basils!

I’m a terrible basil failure, or at least I have been in the past.  Of course, in the past I’ve kind of just sprinkled some seeds on some dirt and hoped for the best.  I watched some YouTube videos and ready some WikiHow articles and feel relatively confident that I can follow some easy instructions.  Growing basil from seed, you basically need to thin them out as soon as they’ve grown about 3/4″ high – then when they’ve grown their second set of leaves you have to pinch those off.  When your basil flowers you need to get rid of those.  Pulling sprigs off the outermost growth will help keep the plant bushy.  One time, I had a 7-inch tall basical that was only a stalk and a couple of leaves at the top.  I hung on to that thing for a year before I gave up… until now.  I can’t wait to see how they do this year – I will be vindicated.

There’s a tradition in my family of never being too young to know something.  Honesty is tantamount.

Somehow the thought process led to a place where lullabies were slipping out of me… they are sad, a bit, and nostalgic, and this is one of them –

from the night sky, so

The summer sun goes down lately

Waves are salty, they wash on the beach

The sand on our feet flows

Hold your hand just as long as I can

Until you have to go

The audio is obviously not where it will be one day – cheaply recorded through the desktop’s built-in microphone but I will figure out this four track one day, I’m sure.  I’d like to get some strings on here, and maybe a little kid to sing the repetition with me.

I don’t think I’m officially qualified for days like today.  Mind you:  it’s only 7:23am and I already feel completed blindsided by all the good things and the not-so-good things in life.  Observe:

At 5:15 this morning I got a text from my coworker (and friend) that her baby had arrived an hour earlier!  She wouldn’t be in to work today.  😉  I could barely get back to sleep for the remaining 45 minutes before my alarm went off, but somehow I managed after fighting extreme joy and also a little sadness that I hadn’t quite come to terms with spending the next few months without her hanging out with me all day.  Apparently I’m 4 years old and don’t understand that being pregnant ultimately results in an actual baby.  Regardless, the happiness was way bigger so I finally snoozed until the cats were scratching the crap out of the bedroom door (which they do exactly 5 minutes before the alarm goes off).

At 6:50 this morning, my usual ‘get in the car and go’ time, I exited my apartment only to see all the CDs that had been previously stored in the car’s console were now all over the street.  Serves me right for not joining the 20th century and having a nice portable iPod.  Hmm.  And my window, which was previously stuck about 1-inch open (damn motor broke, haven’t fixed it yet but now I’ll have to) was gaping wide.  Oh good!  A stranger was in my car, rooting around, stealing stuff.  The only thing they took was was the iPod-to-Cassette adapter that boyfriend put in the car when his was hit-and-run a month back, also right outside our house.

Some people cry when they’ve been violated, some people  get angry:  I do best when I really try to see the irony in things.  “O.K., Guy (or Girl):  You got the rush of adrenalin when you broke in to my car and ruined my window, but it wasn’t like I was going to fix it anyways.  Also you had fun rooting around in the trash, food containers, and receipts I leave in my car.  Did you see that 50-lb tub of bottle caps in the backseat?  Thank you for not screwing around with that.  So basically you committed a felony for an iPod-to-cassette adapter which probably won’t even work in your car if it was made after 2001.  Then you threw my crappy CDs (all our good music is on records) all over the road in a grand gesture of frustration that there wasn’t more than trash, bottle caps and receipts in the car).  Good job, kiddo, you win the prize.”

I wasn’t even bothered on a logical level, more of a philosophical, boundaries-related level.  Anyways I’m getting renter’s insurance today because if people don’t mind smashing in to boyfriend’s car or breaking in to mine it’s only a matter of time before someone tries something even more ridiculous.  I’ll also probably get an “ADT” sticker for the door, I think that’s a deterrent, right?

So then I get to work, only after stopping at Tony’s Donuts for a creme horn and a coffee… because I was celebrating… and licking my wounds… all in one pastry.  The guy there was like “Have a great day!” and he really meant it, so in my head I thought “Yes, OK, I will, regardless,” because it had already been 50% wonderful and 50% horrible, all before the sun really rose.

And I get to work, park in my spot, and saw a meeting of turkeys (that’s the proper noun of assembly, p.s.) walking across the golf course that abuts our parking lot.  Oh!  I cut the engine so I could hear them.  They were talking, and one was making a real ruckus behind the neighbor’s fence.  I counted them as they moved across the wet asphalt, I see them walking this path sometimes in the winter but not the Spring.  They were big, adolescent turkeys:  their talons clicked against the ground and several of them rustled their feathers, wet from the morning mist.  7..8..9..10.  They made their way in to the thicker woods when all of a sudden a loud screech and the beating of wings brought two more turkeys flying over the fence to join their friends.

Because I’m a dork, and just slightly on the perimeter of believing in ‘new age stuff’ I had to search animal totems since it was such a poignant ending to such a strange morning.  Apparently, after searching several slightly sketchy web sources, the turkey reminds us that things are ever-changing, of the value of ‘having enough’ and of course, sacrifice for the greater good.  Having watched that PBS documentary about the guy who ‘imprinted’ unhatched turkeys and raised them through a year I think those big birds were just a reminder of the forward movement that we must inevitably take.  They all walk together, slowly, on an invisible path that cuts through industrial parks, golf courses and deep forest.  This morning my path was a big rocky, with ultimate highs and lows, but what else can you do except keep on walking it?

Hey internet, how’s it going.  I have been on a brief hiatus from posting new Etsy listings, making “Little Eye” products and being a good businesslady.  That’s okay:  the ebb and flow of the creative process shouldn’t be fought.  In fact, to do a good job sometimes you have to act like an anti-business to maintain your happiness and freshness – that’s what I’ve been doing.

What’s been keeping my hands busy:

Big Thaw applications just closed, so now begins the process of learning everything about the vendors and posting article after article online.  I love that part.  I think we’ll be doing some raffles/giveaways through the site this year and I’ll try to amp up marketing.  Anyone know anything about that?  I sure don’t!  Well actually I know a little… what I really need to know is someone on TV or someone who writes for local press.  Hook it up!

Also, I’ve been chugging away at a large wholesale order for a lovely wine and beer supply company out of Seattle, WA.  There’s nothing like filling your kitchen with a stockpile of bottle caps, washing them, poking holes in them, beading them, packaging them and shipping them to really get your heart racing!  Actually, it’s fun and totally satisfying to complete a huge order and to do it with some kind of process.  But it’s definitely taking up some serious creativity time!

Lastly, our band Bath Salts has been writing, recording, practicing songs like nuts since September.  It’s so much fun.  We just get together, make loud sounds, work until the sounds are good together, then find some people who want us to play at their venue and pack it up in the car and go there.  You can view a couple of our songs here on Bandcamp, but there’ll be about 6 more in the next coming weeks.  Check back!