Kate Sullivan-Jones and I had made plans to use her mother’s AMAZING digital camera (amazing to us because we don’t have to then scan our negatives in order to get digital files to) to make new listings on Etsy.  About halfway through, Kate said “Oh my god, we’re out of frames!”

Because neither of us had made the leap to digital yet, there were no extra cards lying around so we flipped through the images (deleting the “bad” ones) to make room.  Finally we’d gone through the whole batch and got back to set.  On the first frame the camera then says “Check battery pack.”  Again – no back ups for us, we’re new at this.  So then Kate goes to plug the charger in the wall and almost simultaneously…

THE POWER GOES OUT.  Awesome!

Kate, modeling, before the power went out!

We waited for a minute or two to see if it would come back.  Right before she had plugged the charger in she was also talking about making us pasta.  Oops again, no power to do this.  So we decided to go up to the gas station to see if they had some power and samosas. 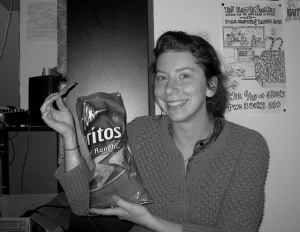 Cool!  They had samosas, well just one actually, sitting atop the counter in the middle of a store with no power.  I bought the usual fare of Doritos, A&W Root Beer and a Snickers bar.  I can’t help myself.  Kate just went for the samosa.  The guy tallies our items in his head (no register!) and we leave.  About halfway across the parking lot Kate has taken a BITE out of the SAMOSA which instead was a doughy pocket full of rancid meat and moldy fur!  Ahhh!  No, Kate, no!!

After she spit it out I said we had to go get something different for her.  She felt really bad for some reason, although if I just had taken a mouthful of furry meat I would definitely be more angry than sorry.  I told the guy we needed to exchange it and he said he was making more samosas (grease was still hot, so it was still cooking!) and Kate was brave and wanted a new, fresh samosa that had just been cooked.

So we waited outside on the stoop.  Portland is so quiet and peaceful without power.  No usual hum and buzz of unnecessary electronics.  As we’re sitting out there I’m like “Ugh, what is that burny smell?!” and Kate’s like “I don’t know!”  Then the guy came out a couple minutes later and pointed off to the right, and ran over and started kicking this little thing in the parking lot that was on fire.  “What is it?” and he yells back  “It’s a sock full of tobacco!”  True as truth, that’s what I had smelled a couple minutes earlier.

Everything after that was pretty normal.  We went back to Kate’s with a fresh samosa, got things set up for a couple days from now when had more time, more daylight and more power being on!  Not too bad for a Sunday afternoon.

Check soon with my Etsy site:  http://littleeyedesigns.etsy.com for the work we did today!